Welcome crawling fans, it’s spring time again and that means here in the Midwest the weather is unpredictable. When KCRC planned the 2020 Midwest Indoor Challenge to take place on March 7th they had no idea if we would have a foot of snow or a beautiful 70-degree day. (luckily we had the latter). Clear skies and sunshine had many competitors pouring in from all over the state to try their skills on epic courses put together by KCRC’s most talented. FastLane Raceway in Blue Springs Missouri was the venue for this much-anticipated event and though they don’t regularly host crawling events, this was not the first time KCRC had hosted an event here. It all started back in 2008 when KCRC and FastLane hosted the first Midwest Indoor Challenge. Top competitors from all over the nation came in to run the courses and forever marked Kansas City as part of the genesis of the RC comp crawling scene. Scale rigs were a rarity at the time and MOA (motor on axle) Clods and AX10 Scorpions were the norm.

A lot has changed since then, the Axial SCX10 came out and catapulted the scale scene into the forefront and comp rigs took a backseat to the new craze. The popularity of scale crawlers has forced the market to shift in many ways and the comp scene largely shifted with it. The Midwest Challenge went from being a 2.2 Comp Crawling event to a Scale RC crawling event. The impossible rock sections give way to more natural-looking terrain to accommodate the change in the machines being driven. What hasn’t changed though is people’s enthusiasm for the sport of RC rock crawling. 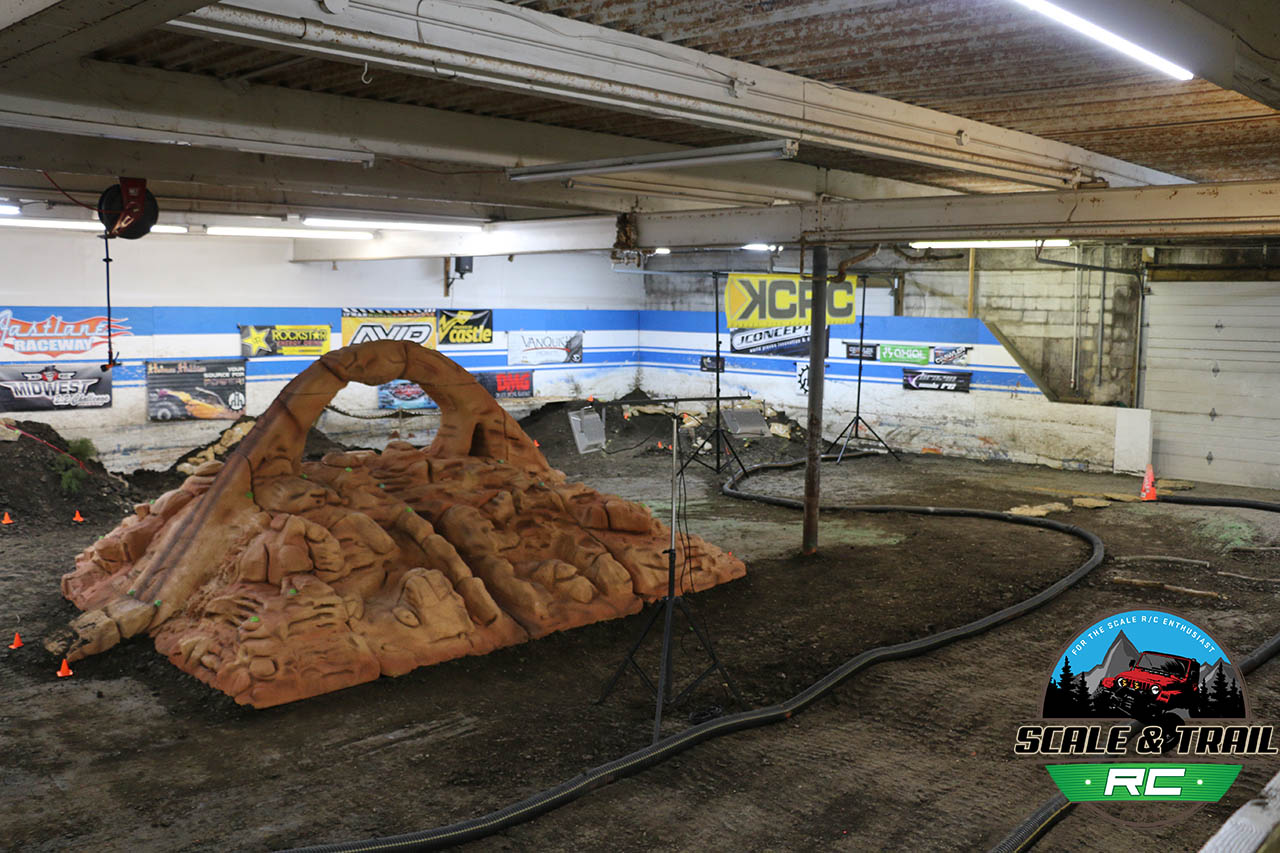 KCRC was hard at work Thursday and Friday prepping for the events to come on Saturday. They built 2 dirt and rock courses, brought in the long awaiting mobile crawling course and still had time to set up a rock racing segment on FastLane’s dirt track. Each course had its own flavor as they were designed by different members of the crew. Several lines would wind over and under with bridges and tunnels keeping things interesting and exciting for spectators and drivers. The combination of dirt and rock gave the courses a sort of trail feel and they featured little scale touches here and there to enhance the effect.  The only thing missing was some of that Missouri mud. 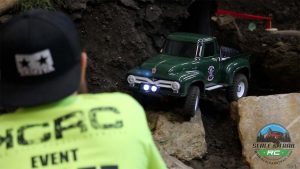 The competitors varied from sponsored drivers to dads and their kids getting their first taste of scale comping, to the curious onlookers who had no idea there was a tiny truck competition scene. Easily the centerpiece of the entire event was the fully synthetic portable crawling course. Bristling with tons of challenging obstacles; Its mountainous desert style landscape added a bit of variety to the event. One such obstacle I dubbed “The Arch of Doom” which perched your rig 7-8 feet above the ground. You had to perfectly time your decent or be sent tumbling through the last gate if you didn’t have enough wheel speed to outrun your downward momentum. Countless trucks took tumbles here and most competitors saved this course for last. 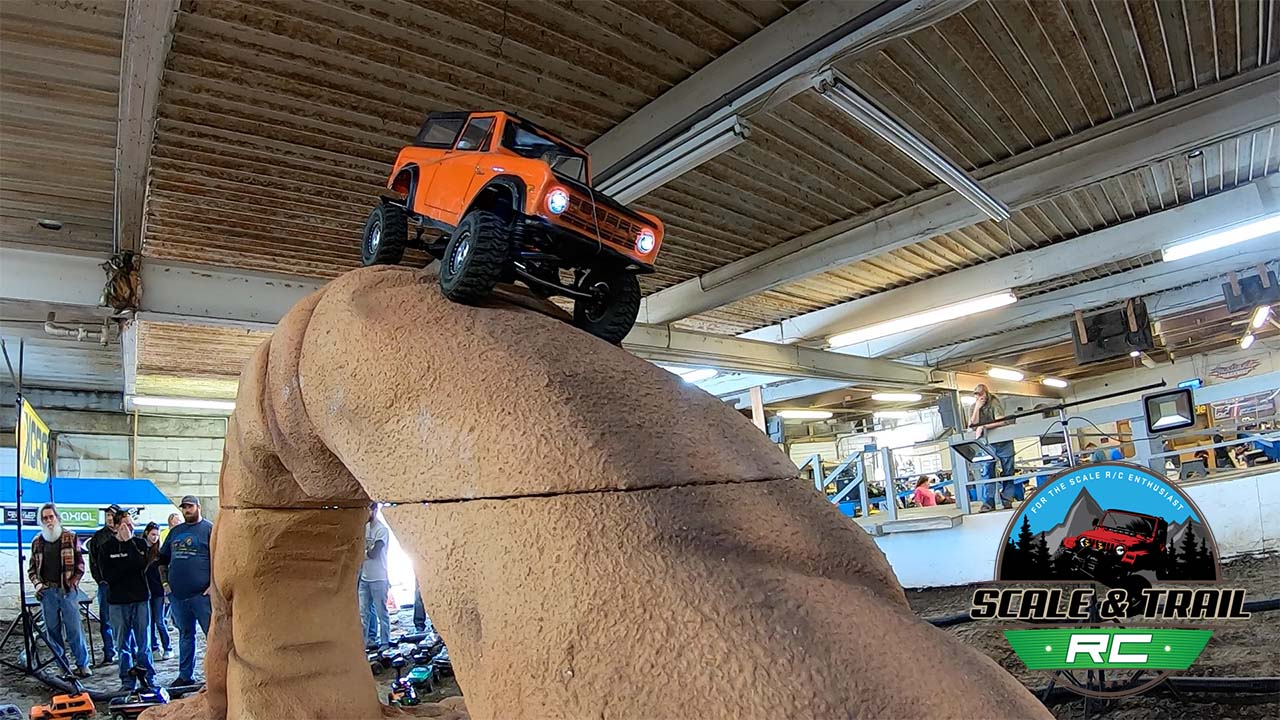 Competitors had 7 minutes on each course to complete as many gates as possible. Points scoring was based on SORRCA rules, but the judging was friendly enough to new competitors to ease them into the unfamiliar territory that is competition crawling. I saw many experienced drivers coaching new drivers through their courses. This is key to bringing new drivers into the hobby. The better the experience is for the first time attendee the more likely they are to become involved and support the local scene. On the other side of that coin, local hobby shops that get involved are key as well. If a club can bring people into your establishment the more likely you are to sell some product and earn repeat customers. FastLane is largely a racing based hobby shop, but I heard talk of the club’s involvement with them expanding and possibly holding events there more regularly. This is great news for everyone involved, I’m excited to see what the future holds there. 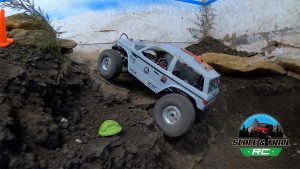 In closing, I’d like to extend a thank you to the hard-working KCRC members who set up and judged this event. Judging can be a tiring and thankless job, but there is no way an event like this can happen without these folks. On behalf of KCRC thank you all for your passion and effort.

The Midwest Challenge is a historic event for the RC crawling hobby dating back over 15 years. If you would like to attend the next one head out to FaceBook and give their page a like to get notified of coming events. You can find it here.

A few more thanks are in order to Dinky RC, MCC, Death Metal Garage, FastLane Hobbies for making this event possible.

And finally, if you are interested in getting into comping you can find the full SORRCA competition rules: here

Thank you guys so much for stopping by.

Keep the shiny side up