I wanted to weigh in on this whole Monster Truck resurgence we are seeing this year. When I set out to build my pieced together Axial Monster at the beginning of this year I had no idea that 2016 really would be the year of the monster truck, not just for me, but for everyone. Axial had been hinting at a new product (which turned out to be the SMT10) but even before that I think we all had a feeling something was coming to put Monster Trucks back on the main stage of RC. Proline Racing shook the RC Monster world by finally putting out the Brawler, a MT wheel designed for the modern era and now it seems like the flood gates are open. JConcepts has been pumping monster mania like crazy the last few months with BigFoot styled Ford bodies and now a new wheel and tire combo that looks fantastic. Years and years of drought for the longtime monster fans and now it seems like we are swimming in it.

Do I think we are finished seeing scale monster stuff this year?? Not by a long shot. I recently attended my first RC Monster Truck event at none other than BigFoots new home in Pacific Missouri this summer and got to see just how big this scene is. Trigger King RC was hosting an event at the BigFoot digs and the attendance was huge. Not only did they have full size rigs on hand to wow the crowds the RC event drew in thousands of spectators. In between heats while wondering the grounds I noted Traxxas logos on all the team BigFoot trucks. None of the staff would even give a hint as to what that was about but it isn’t a huge jump to assume some licensing deal is going down. Lets hope it’s more than just being a title sponsor for the tour. We all know Traxxas has owned the basher monster truck market for the last few years but the lack of a solid axle truck has kept the hardcore away. Here’s hoping they fully get on board with the scale aspect of monster trucks. Hear that Traxxas?? We want solid axles! 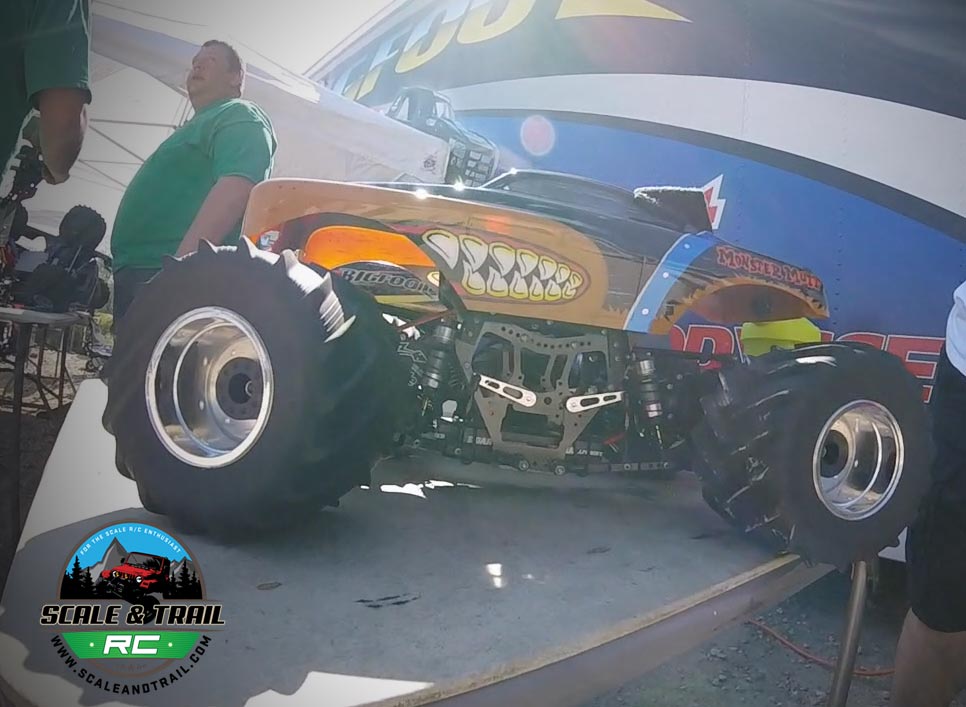 So for the fans who never put their monster trucks on the shelves years ago (I’m talking to you holdouts with the blinged Tamiya racer rigs and fully custom one-offs) this resurgence will probably be a bit annoying as the market and clubs are soon to be over run with new comers, but try and be patient because all of this attention for this segment of the hobby can only bring great things. I think the aftermarket will begin to grow and I suspect with Axial jumping on board that monster trucks will begin to drift away from being 1/10th scale racers that resemble the real thing and start being scale versions of the trucks. There is no reason todays trucks can’t go fast, go big, and look realistic doing it. This is the part that has me really excited about the direction monster trucks are headed.